We have spent thousands of hours with the Kafka stack. For every Fast Data release we test both our code and Kafka itself in order to weed out any bugs. Below are some of the most common issues we encountered.

In such cases the best bet is to check the service’s role log from Cloudera Manager. In our experience there are cases where a service process may start but stack in the initialization process. Logs will usually show the reason.

An example are Kafka Brokers, where if they start with too little RAM available, they won’t be able to start their listeners.

Unfortunately given the facilities provided by Kafka and Cloudera Manager, it is very difficult for us to catch such errors for the time being.

Starting with CDH 5.8, Cloudera Manager can detect some errors in JVM based applications. We do make use of this feature but your mileage may vary.

For Kafka REST Proxy to support Avro, access to a running Schema Registry is needed.

Schema Registry uses a Kafka producer to store information to its topics. In some rare occasions we’ve seen this producer to fail to start due to memory issues. Increasing the memory limit for Schema Registry doesn’t seem to help.

There seems to be some connection to the number of bootstrap servers (listeners) and this issue, so you could try to lower the number of your listeners if you can —e.g if you have many listeners for each broker.

An instance of Schema Registry at version 3.2.2 or greater may fail to start when there is already a master instance running, or all instances try to start together. Usually it is enough to restart the failed instance and completely safe.

A possible permanent fix for this, is to increase the kafkastore.timeout.ms for the Schema Registry role. The default is 500 milliseconds. An increase to 1000 or even 1500 milliseconds can help.

At version 4.0.x, a Schema Registry will also fail to start if you disable the http listener.

The are usually two scenarios that lead to this issue.

We have found that in some occasions Cloudera Manager doesn’t give proper ownership to the logging directory, thus the Kafka services can’t write to their logs.

The Fast Data services run under user fastdata and group fastdata. In case you encounter this error, please make sure in the nodes that run Fast Data services, the /var/log/fastdata directory belongs to this user and group. If not, assign ownership manually:

1.7.7. Service starts but exits without errors in logs¶

This could be due to the process being killed due to using too much memory (out of memory error). Usually Cloudera Manager from 5.5 onwards will show you this in the process status. Try to increase the heap size for the process. For Kafka REST you may also try to decrease the consumer.request.max.bytes property.

Another scenario that can lead to such an issue, is when incompatible classes are loaded. This holds specially true for Kafka Connect. Adding a connector to the classpath that shadows libraries used by Kafka with its own versions may lead to connect worker crashing with no message whatsoever (even if log level is set to TRACE). This is the reason we compile the Stream Reactor collection of connectors with the exact same version of Kafka we provide in our KAFKA_CONFLUENT parcel

This issue happened with the 3.1.x version of the KAFKA_CONFLUENT parcel. Please contact us if you still see this issue with 3.2.x or later.

If you have installed and activated the FAST_DATA_STREAM_REACTOR parcel it can cause problems with the HDFS connector that comes with the FAST_DATA_KAFKA_CONFLUENT parcel due to the included HBase connector jars shadowing some hadoop java classes.

Please deactivate the FAST_DATA_STREAM_REACTOR. We will issue a proper solution in the future to let you disable only specific connectors.

In some cases you may notice underreplicated partitions and brokers out of sync whilst your cluster is all green with a log message like:

To prevent the issue from reoccuring you can try to increase zookeeper session timeout for the brokers, via the setting zookeeper.session.timeout.ms in Fast Data’s configuration page. Since this change will require a restart of the brokers, you can adjust it before performing the rolling restart that will fix the issue.

Increase ZooKeeper Session Timeout for the Brokers to possibly avoid this in the future.

1.7.10. Kafka REST does not return messages¶

The consumer.request.timeout.ms option is by default set at 1000. Frequently this leads to Kafka REST not returning any messages for topics with more than a couple thousand messages, especially if the offset reset of the consumer is set at earliest.

To fix this, consumer.request.timeout.ms should be set to 30000. Due to a bug since version 3.2.x of Kafka REST, setting it lower isn’t possible because this settings leaks to Kafka REST consumer’s request.timeout.ms option which can’t be lower than a certain threshold (depends on other configuration values).

Since version 3.2.x Kafka brokers may fail to start if Zookeeper Authentication (authenticate.zookeeper.connection) is enabled and not at least one broker is already up. This is due to the brokers not being able to get controller status whilst starting up when Zookeeper authentication is enabled. 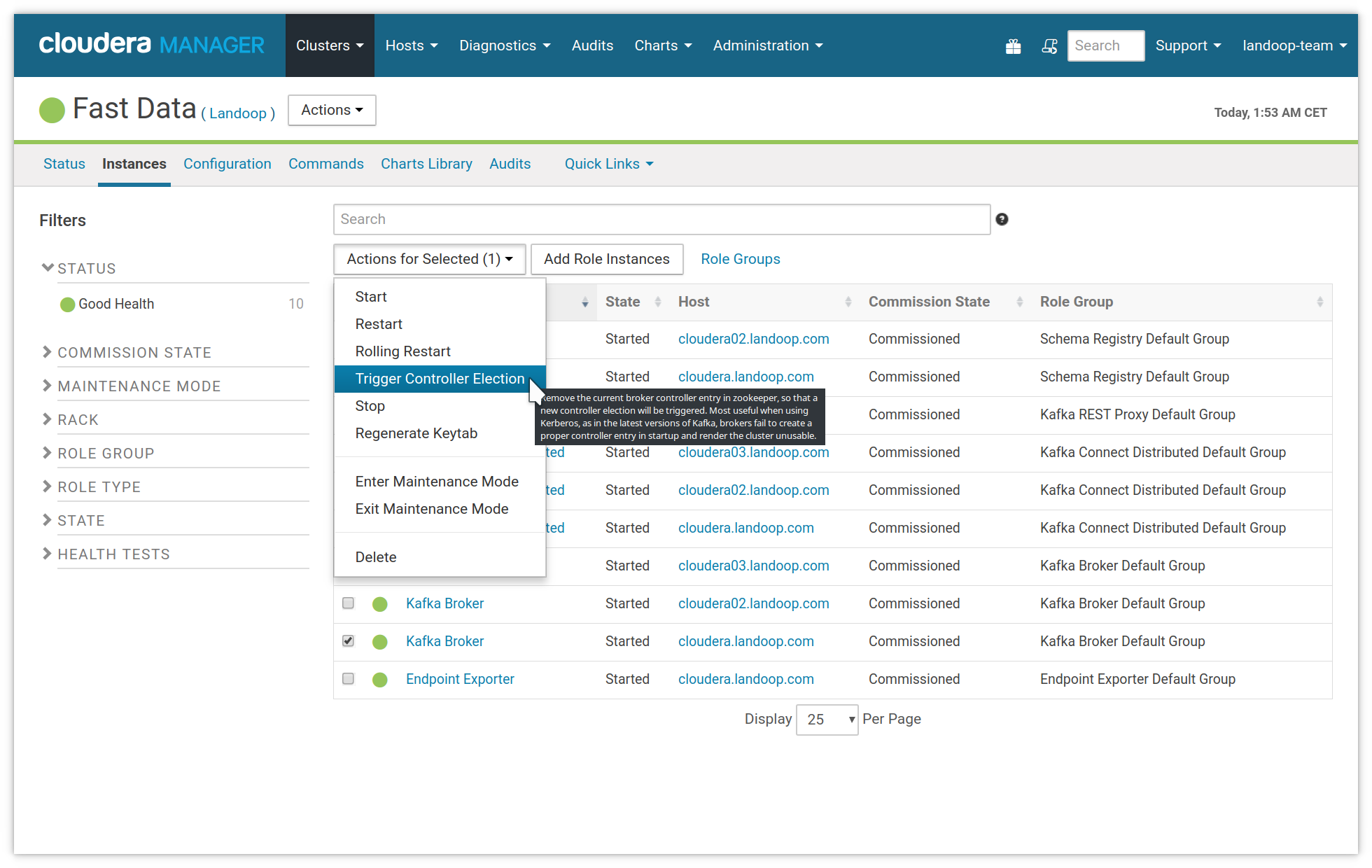 Manually trigger a controller election by selecting one broker and running the action with the same name.

To avoid this problem in the future, on a Kafka cluster setup with Kerberos, please perform only rolling restarts on the brokers.

Sometimes a null entry may be written in the zookeeper controller node by a broker. This behaviour prevents the cluster from working and also doesn’t let the controller election process to trigger.

The solution, as in the previous paragraph is to trigger manually a controller election. This action removes the null entry, so the election process can proceed.

At the Fast Data service in Cloudera Manager, visit the instances tab. Select one broker (any will do, just one) and then use the action trigger controller election.

Manually trigger a controller election by selecting one broker and running the action with the same name.

A suggested debug process of a failing instance/role is: