Here you can find information about installing multiple instances of Fast Data to the same cluster as well as how to uninstall and clean-up remaining files and zookeeper.

We took special care to enable you to run more than one Fast Data instances on your Cloudera cluster. Whilst it may seem counterintuitive at first there are legit reasons for such a setup. Examples would be security and resource separation. Whilst Kafka supports ACLs, for simple tasks such as separation between two teams, it may be much easier to setup and manage a second Kafka cluster. Resource separation could be using different nodes or different disks per cluster.

In order to add a second (or… nth) instance you have to be very careful of four configuration options, because they can damage your existing cluster if shared between different Kafka clusters. The last part (ports) won’t damage your cluster but will prevent the new instance from starting until corrected.

If the Cloudera cluster doesn’t have internet access, an alternative installation method should be used. Such methods are better documented in Cloudera’s website.

For these methods, the cluster administrator to manually download our parcels and make them available to the cluster.

Our parcels can be found at our archive. The version downloaded and installed should match the version of the CSD. As an example, if the 3.3 CSD is used, the latest 3.3.x KAFKA_CONFLUENT parcel should be used. This holds true for our other CSDs (Tools and Monitoring) as well. Special care is needed for STREAM_REACTOR, where its version should match exactly KAFKA_CONFLUENT version (e.g for Kafka 3.3.0, a Stream Reactor build for 3.3.0 should be used).

Whether you want to remove completely Fast Data or re-install the service, some manual cleaning procedure may be needed. The CSD’s role instances store data onto the disk and/or Zookeeper. Unfortunately we cannot automate this for you.

To uninstall the CSD, you should first stop any running Fast Data services and then delete them from the cluster. 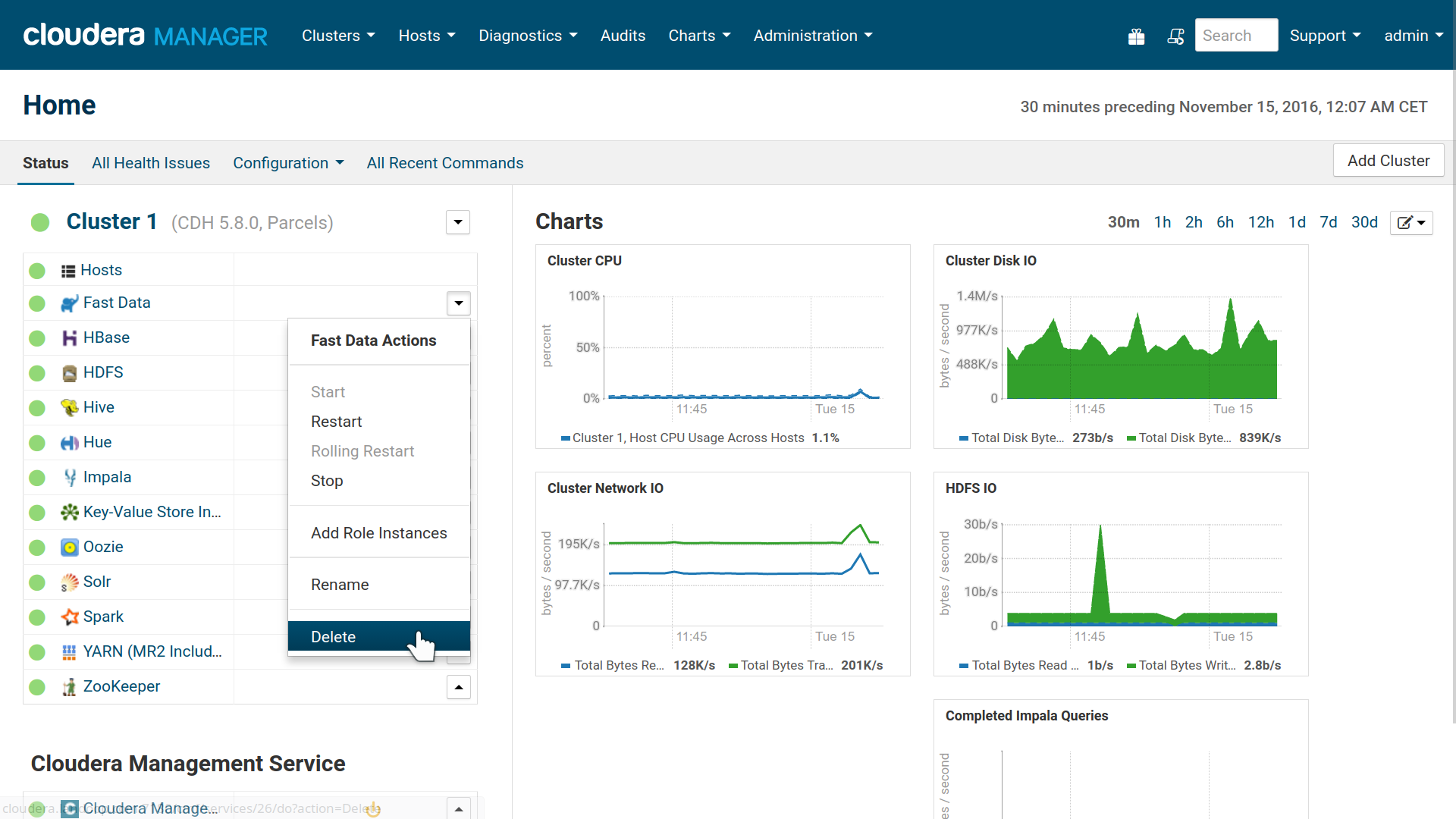 Next visit the CM’s Parcels tab and deactivate, remove from hosts and uninstall our parcel.

In our experiments, in one occassion Cloudera Manager wasn’t able to start again after the CSD removal due to missing metric sources. The solution was to copy the CSD back, start CM with it, stop it and remove the CSD again.

The only service that stores data are the Kafka Brokers. Each broker has a unique ID and stores its data inside log.dirs.

If you remove a Fast Data service, you may want to clean these directories to free up space and make sure any future installation won’t find old data. Default log.dirs location is at /var/local/fastdata/data.

Logs are also stored for your roles. These are stored inside /var/log/fastdata and may be removed freely.

Kafka Brokers and Schema Registry use Zookeeper to store data.

The default Znode for brokers is /fastdata and all topic data are stored below this. To delete it you may use the Zookeeper client:

For schema registry the default Znode is /schema_registry and you may delete it by running:

If you have enabled Kerberos authentication and the Zookeeper ACLs (zookeeper.set.acl option) Kafka’s Znode is secured and only writeable by the kafka Kerberos principal, hence you can’t delete it.

The easiest way to mitigate this, is to restart the brokers with the zookeeper.set.acl disabled. The CSD will then unsecure the znode and you will be able to delete it with zookeeper-client.

In case you don’t have anymore access to the service, you should use the kafka kerberos principle with the zookeeper-client to be able to delete it. Directions for this procedure are outside the purpose of this document.

In an attempt to improve upon this and also offer process level metrics (memory usage, CPU, open file descriptors), current Fast Data offers the option to instrument its roles with metric exporters as java agents.

Our monitoring solution works by converting JMX metrics to Prometheus metrics and exposing these as endpoints that Prometheus scrapes. The tool that takes care of this task is called jmx_exporter and it can work in two modes: as a standalone server that connect to the process to be monitored via the JMX port or as a java agent, which is loaded into the process to be monitored (e.g in a connect worker). The former case is handled, as always, by the Fast Data Monitoring service. The latter is part of the Fast Data service.

The configuration option fd.monitoring.prometheus enables augmenting with java agents the Kafka Connect, Schema Registry and REST Proxy roles. The brokers require to enable the fd.kafka.monitoring.prometheus.allow option as well. The reason behind this, is that the brokers on a production cluster may export tens or even hundreds of thousands of metrics. The jmx_exporter java agent isn’t well tested under such load and can experience issues. As an application running as a java agent is essentially a part of the application it runs in —the brokers in this case— it can cause problems to it. If for example the jmx_exporter was to crash under the load, the broker would crash as well. Thus for production systems with many thousands of partitions and thousands of clients, it is advised to augment the brokers via the standalone server: adding broker metrics exporters in Fast Data Monitoring instead of setting fd.kafka.monitoring.prometheus.allow.

If you have added an Endpoint Exporter instance to your Fast Data service, the endpoints will be exposed via zookeeper and Prometheus will autoconfigure itself, so you will not have to add addresses manually. 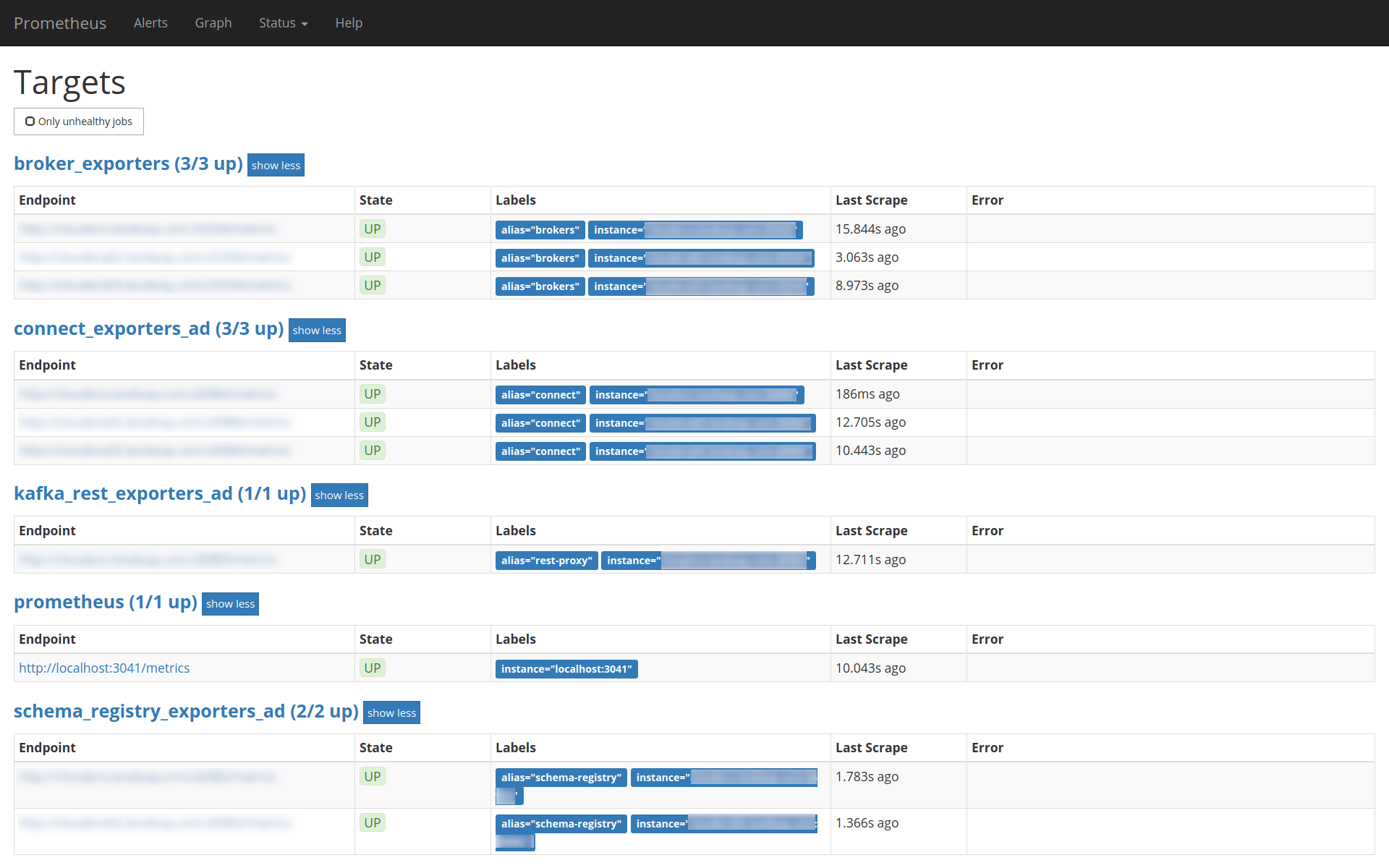 In this setup, there are broker metrics in Fast Data Monitoring, whilst metrics for the rest of the services are exported automatically via the fd.monitoring.prometheus. Notice how prometheus adds the suffix _ad to these services, to show that it autodetected them via the Endpoint Exporter.